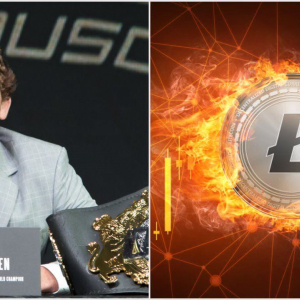 By CCN: The Litecoin price has surpassed $100 once again and nobody is more pumped about it than UFC Fighter Ben Askren. The LTC price hasn’t been trading in the triple digits since June 2018, according to CoinMarketCap data. It’s up more than 13% today and Litecoin disciple Askren is shouting it from the Twitter rooftops. Earlier this year, the Litecoin Foundation sponsored Askren, whose nickname is “Funky”, for UFC 235, his Ultimate Fighting Championship debut match in which he faced Robbie Lawler. Askren was named the winner of the match after three minutes and 20 seconds, but Litecoin won, The post UFC Fighter Ben ‘Funky’ Askren Shills Litecoin as Price Pumps to $100 appeared first on CCN